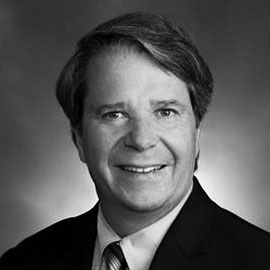 Ron has led teams of communicators and Public Affairs professionals as the senior executive at Kaplan Higher Education, (during a particularly intense period of regulatory scrutiny), Aramark (during a corporate campaign by a labor union) and H&R Block (during a proxy fight and its successful turnaround with critics on its refund loans).

He began his career in newspapers, spending 18 years as an editor at papers such as the Wall Street Journal, Los Angeles Times and Cincinnati Post.

In 1994, he moved into public relations as a Senior Vice President at Sitrick & Co., a crisis and financial public relations agency in Los Angeles. Ron  then joined AlliedSignal, where he worked in communication roles in the Aerospace and Automotive divisions.

He spent 9 years at Ford Motor Co, in several senior Public Affairs roles, primarily in Global Corporate Communications, as Vice President of Global Communications at Ford Credit and in the Office of the President. Among the issues he handled was a fatal Legionnaires Disease outbreak at an assembly plant, ongoing financial challenges accompanied by a string of executive departures and the repositioning of Ford Credit after a tumultuous period. Ron also led communications of the Land Rover acquisition and a unique program to give computers to all employees as well as assisting on the Firestone tire crisis.

Ron holds a bachelor’s degree in Journalism from Ohio University and an MBA from the University of Chicago.

He is a past chairman of Ohio University’s National Alumni Board and a member of the Journalism School’s Professional Advisory Board. He also is treasurer of the World Press Institute.  Ron has taught or lectured at California State University at Northridge, Indiana University and Ohio University, and has addressed IABC conferences.